That crazy Spaniard’s got Ricky Martin livin la vida loca banging out at full blast on the yard this morning and is happily nodding away to the lyrics “upside inside out” … as a result his stable looks just as you might expect it to … upside, inside out. Brilliant. Now I could just admire this problem and wander off to do something else ‘productive’ (such as timing the tortoises doing a lap of the patio) and leave this particular disaster for the lovely Laura Groom (my amazing couldn’t live without groom and all round wonder woman) to deal with or, second option, I could make a start myself, freeing up Laura to deal with something way worse … Hanoverian the Barbarian’s tail … for which a Kevlar vest and a hazmat suit are mandatory attire; it’s dangerous and disgusting work; this mare prefers to fire her faecal matter, like a surface to air missile at the walls of her stable and her tail gets caught in the crossfire as this revolting mess shoots its’ way to freedom. I start on the Spaniard’s mucky stable.

The Spaniard is now tethered and has already started to display his irritation with that gig by throwing his front legs out in all directions. Not in the slightest bit put off by this impromptu display of the Spanish Walk (in anger), Huggy our resident Free Range Shetland, has wandered over to see him, keen to reacquaint himself after a night’s incarceration (and practise his Spanish no doubt). The Spaniard is having none of it though and begins a livid passage to demonstrate his utter fury. Huggy sighs and wanders off to visit another mate, Surfer Dude, a 17hh ID with an infuriating penchant for eating clothing, mine mostly; no toggle or jacket has crossed his path and remained unscathed, still the Equine Dentist is coming later today and I idly wonder whether or not I might get some of my wardrobe back while he’s fishing about in Dude’s gob.

I’m ready to start polishing the team ready for riding when those two military spec dogs of mine do a fly by, pinching my (favourite) dandy brush as they go. A brief chase ensues, Huggy joins in and Laura Groom rocks up. She eyes the scenario wordlessly, lights a fag, exhales a plume of smoke and bellows “drop it” … brushes clatter to the floor. We’ve all dropped them … Laura is a woman I’d have a tenner on all day long to take Anthony Joshua down in the first round. Even the Spaniard has temporarily ceased with the passaging and is stood stock still. 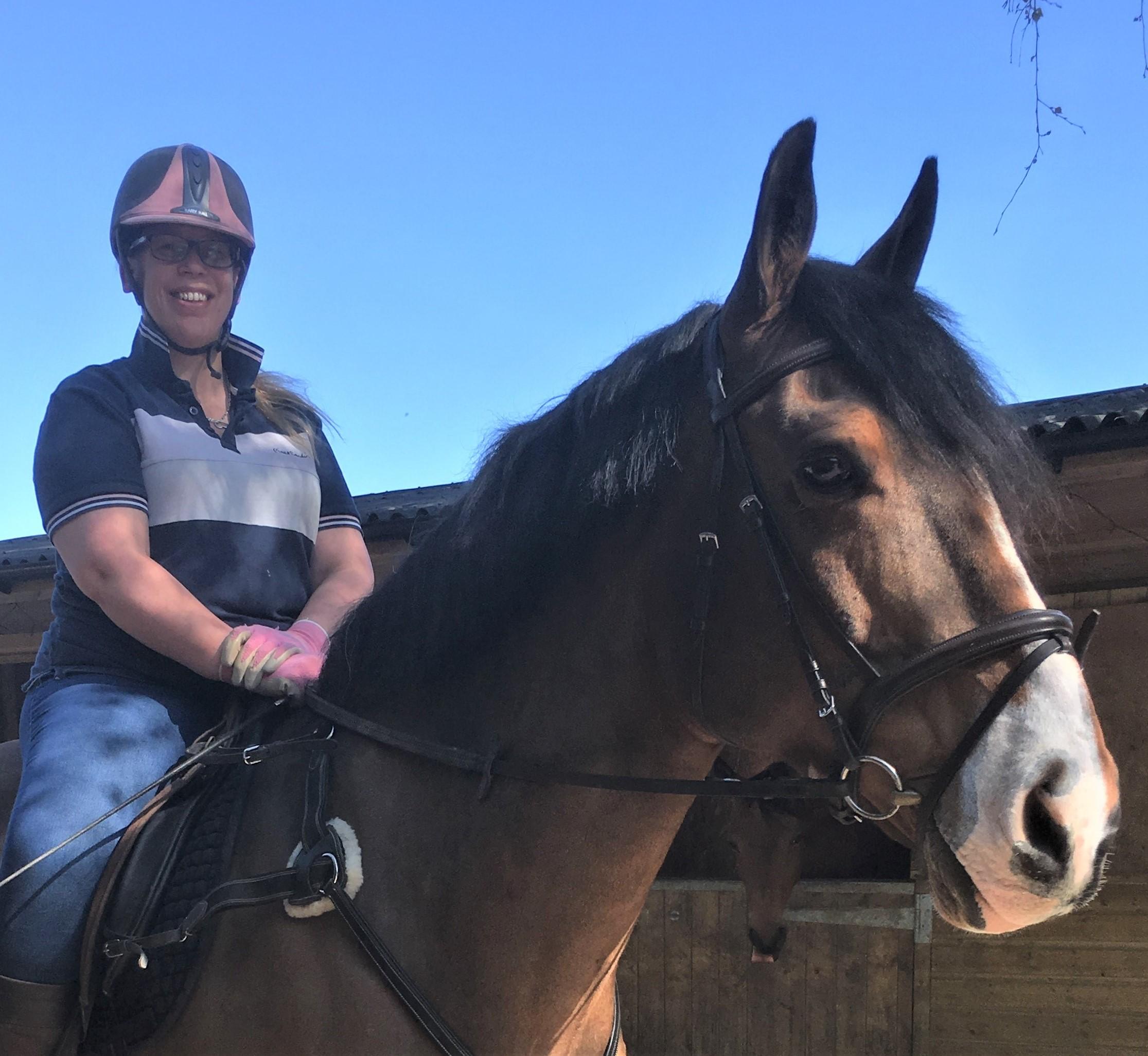 I unearthed Laura Groom about a year ago during my annual trip to the hairdressers; she was a friend of said hairdresser and the rest is history….

I had pretty much given up trying to find anyone to help here … I’d been through a number of ‘potentials’ who, despite claiming they had just missed out on qualifying for Badminton Horse Trials and were regulars out with the drag pack (a hunt that, as far as I can tell, is populated entirely and only by people who have brain injuries or are in the active pursuit of acquiring one) in fact struggled to tack up a horse correctly (or at all), stared at me blankly if I mentioned clipping and whom, without fail it seemed, managed to fall off anything if rising trot became a thing.

In reality what these people needed was a yard full of arthritic pit ponies or, better yet, rocking horses … not a fire breathing, hot tempered, light on their toes bunch of divas, hooligans and treasonous g*ts with questionable tastes in music and who’d follow you round the back of the stable just to shank you for talking about riding them, never mind actually putting a foot in the stirrup.

It was a soul destroying process; things happened that you just couldn’t ‘un-see’. One wobbled off the mounting block, spooked the horse and declined to make any further attempts at getting on. Another fell off whilst getting on (yes, really) and then had to be ‘stretchered off the pitch’ by me and the gardener (who repeatedly pointed out that this kind of thing was absolutely nowhere in his job spec as we carried the body past the dining room windows where the other half was eating his lunch, watching silently as we staggered past with her not inconsiderable mass). This one had lain on floor screaming for a full five minutes after falling off … whilst getting on. She then inveigled her entire family to come and collect her, nanny included (a nod to Jacob Rees-Mogg perhaps?) and then they all went to A&E where it transpired that she’d twisted her ankle. Sighing face. Another one had arrived on recommendation and fresh from the local riding school … that lasted all of roughly ten (non-consecutive) days; never came off the lunge or out of walk or it resulted in a fall from the most sensible horse on the yard (this one could have fallen off the fence) and finally culminated in me phoning up the proprietor of the riding school to ask if this was, in fact, some kind of a joke?

Sadly there were other too. I’d given up. Resigned myself to having to go it alone here and then a chance conversation over a dye job and Laura Groom arrived … and she’s now casting her eye about the yard … clocking the fact that the mucking out has been done, doing the math and arriving correctly at the conclusion that she’s got the tail washing gig. She’s not looking impressed. Discretion being the better part of valour I strike up an alternative conversation … now for all its faults (many and numerous) Face Book is a pretty constant source of amusement around here … last night, on one group related to equestrian skin conditions, yet another ‘recipe’ was being bandied about as a snake oil cure all for sweet itch … this one involved Deosect (insect repellent which already works well in its own right if used correctly) but added to which it was suggested should be Benzyl Benzoate, Dettol (always a firm favourite for some reason) baby oil (that one should cause a horse no end of suffering on a hot day) and something called “Baby Pile” … can’t comment on that because what even is it? I asked Laura Groom, she’s got a toddler, she’ll know. Drew a blank. I suggested that perhaps if we rubbed her child vigorously against something we might get some Baby Pile … I imagine it comes off a bit like candyfloss in her wake, as she toddles about … or there’s quite possibly a worse and more literal interpretation. I’m keen to reply to this post (if nothing else to find out what on earth Baby Pile is) and another one about someone with a horse with “cushions disease” (to which my answer was that DFS should be able to tell you) but Laura reminds me that the Face Book Police will kick me off … then a friend messages me and says “do it anyway”, so I do. 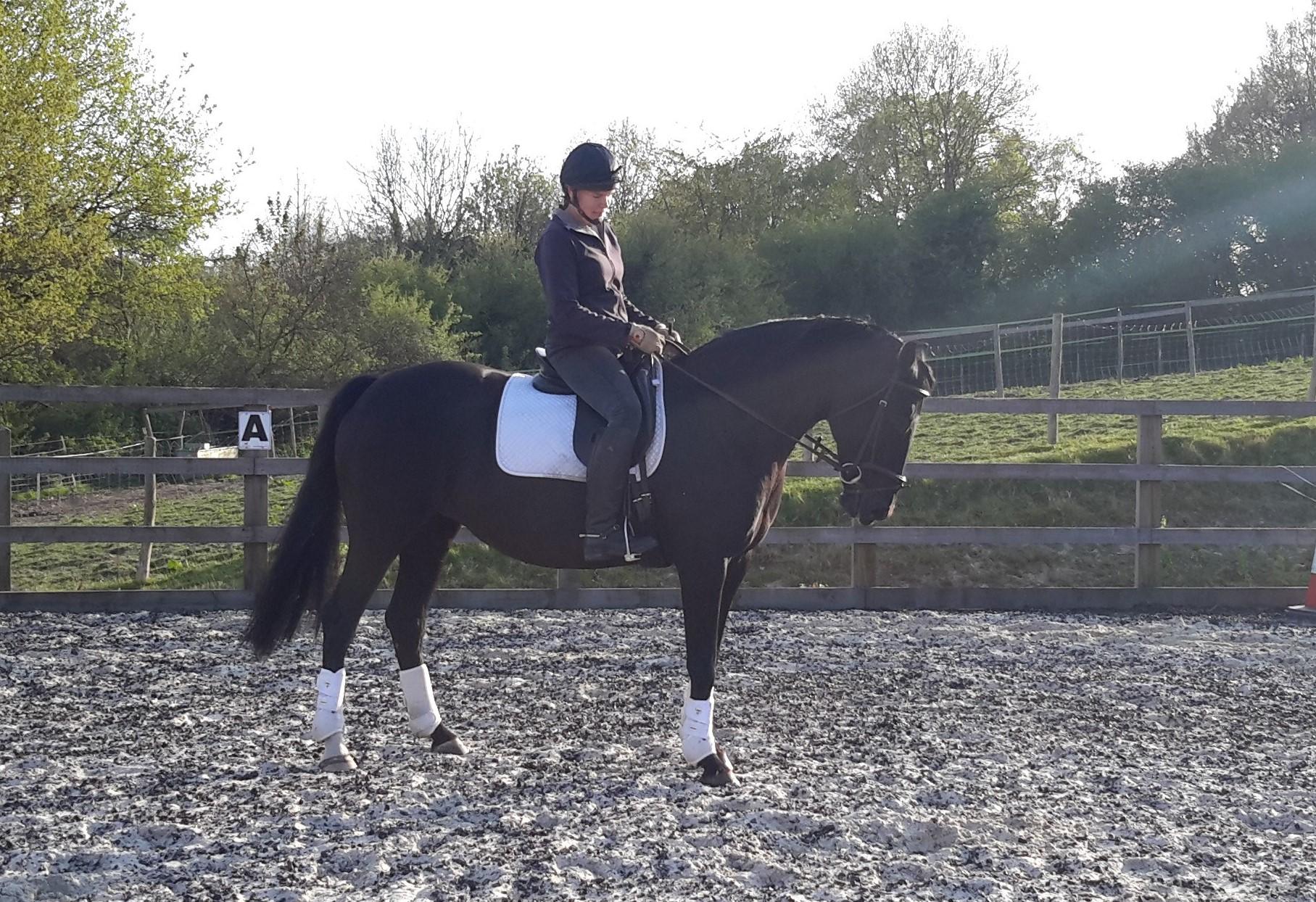 Hanoverian the Barbarian (a.k.a. Ruby)

Hanoverian the Barbarian’s tail is now washed and she’s looking absolutely livid about this turn of events. Laura Groom looks like she’s fallen in a filthy pond. I put my foot in the stirrup, the potty mouthed parrot that lives with us (and can be clearly heard out on the yard) shouts “Jesus loves you!” like some feathered harbinger of doom and away we go. “You next” I say to the Spaniard as I pass his stable backwards, half on the saddle and at speed. Laura grins, lights up a fag and announces “I might just come and watch this” … with a look on her face that wouldn’t go amiss on a toothless old crone sitting ringside at the gallows.