HOMEPAGE > SAM, THE SPANIARD AND HIS STUBBORN ITCH!

20 APR SAM, THE SPANIARD AND HIS STUBBORN ITCH!

I’ve woken up so terrifyingly early this morning, so early that I’ve given myself a headache … no work to do as such and yet I’m up not only with the lark but before him, typical.

Skipping (gazelle like, as if, ha ha) off downstairs it seems that even the majority of the dogs think it’s a tad too early to leave the confines of their cosy baskets and so, save for a couple of the Terrierists who broke cover before even I was up and the two ex Special Ops dogs, Seven and Luna, now retired after their last tour, who are of the opinion that frankly any time of the day, or night, is a good time to be up, out and looking for explosives or bodies, or my missing bloody trainer, I leave the majority of them to it and with Seven and Luna I head off, bleary eyed, coffee in hand, onto the yard.

Across the patio, up five steps and I’m there … a long and arduous commute.

I am immediately greeted by the dulcet tones of that Latino crooner Julio Iglesias playing from somewhere on the yard as our free range Shetland, Huggy, zooms past me (nearly taking my coffee with him) at Mach8 … another attempt by him to beat his personal best time to the gate and back I guess. He picks up even more speed once Seven and Luna decide to join in and my last confirmed sighting of them for the next half an hour is that of a little brown and white behind galloping off towards the woods with Seven and Luna running alongside him like a slightly surreal scene from Champion the Wonder Horse, just with Tonto’s horse Scout in miniature form. 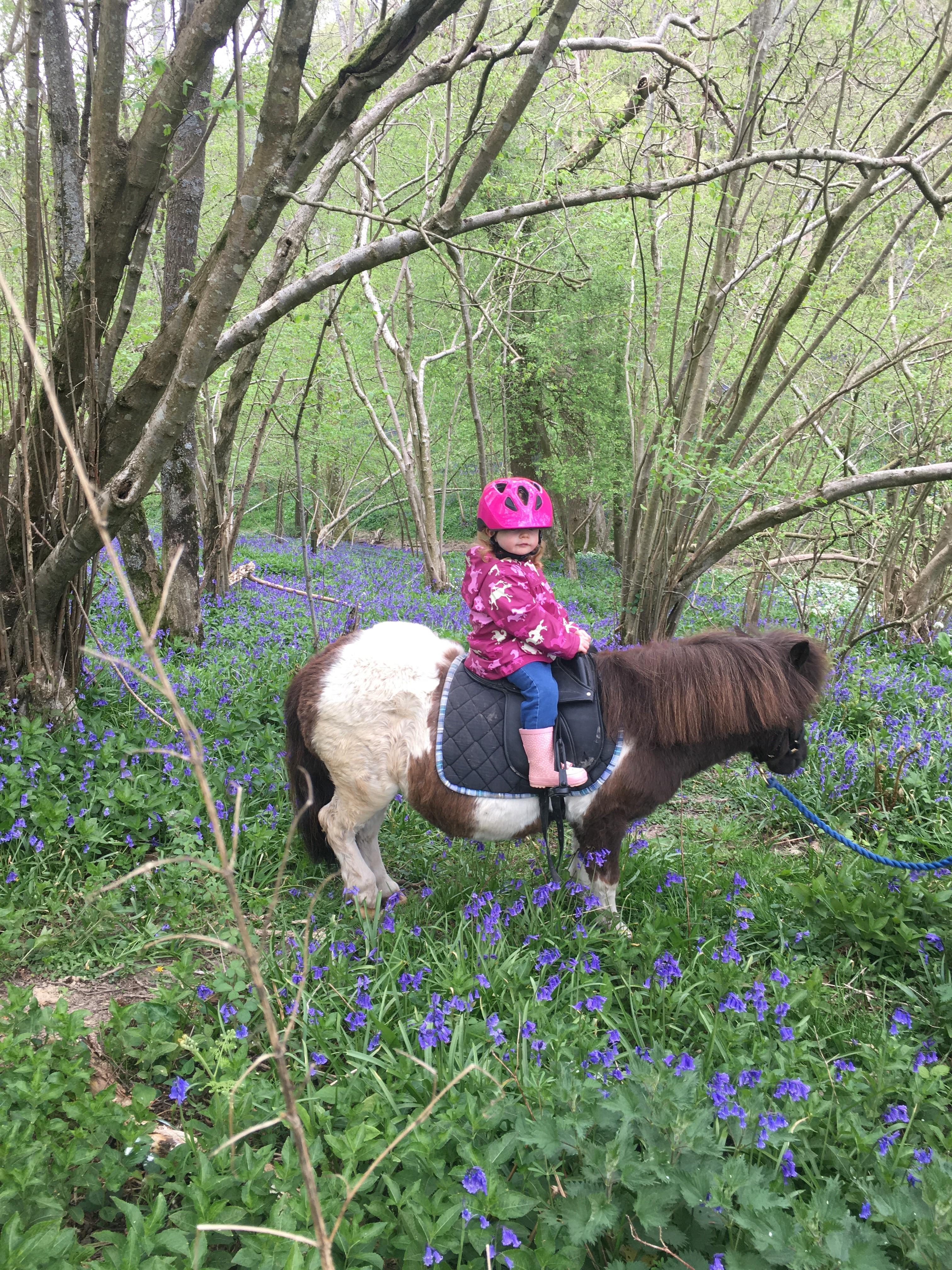 The stabled horses on the yard take zero notice of the Epsom Derby that’s just been conducted straight through the middle of it, it’s nothing unusual and I’m greeted by five equine faces, in amongst which is the Spaniard, trussed up in his sweet itch rug looking like he’s been wrapped in the Turin Shroud (albeit it I only washed the damn thing a couple of days previously). Blinking out from beneath the neck piece even he looks pretty surprised to see me at this hour. In fairness, I’m pretty surprised too. I’ve obviously interrupted his quiet enjoyment of Julio Iglesias’ greatest hits.

Also up and doing are the wretched midges (what a pity no one can get those flying irritants to self-isolate) hence the Spaniard’s sweet itch rugs. The poor lad suffers badly with it (he had veterinary attention for this condition when he first came into my orbit) and so never far from his stable is a bottle of the Sweet Relief Lotion which not only seems to relieve his itching, it makes his coat shine like glass too … a coat that the attending vet initially cautioned me might well never return to its original condition or at all in places; so everyone on the yard now gets a spray when being groomed.

Whilst the Spaniard personally finds this constant maintenance an impediment to his paella eating and Tinto Sherry drinking predilections (and as a result curses me under his breath in Spanish … thinks I can’t hear him) as anyone with a horse that suffers with this condition will affirm, it really is a royal pain in the backside. That said, proper rugs and the Sweet Relief Lotion do make a discernible difference to this boy’s frantic urge to scratch himself. 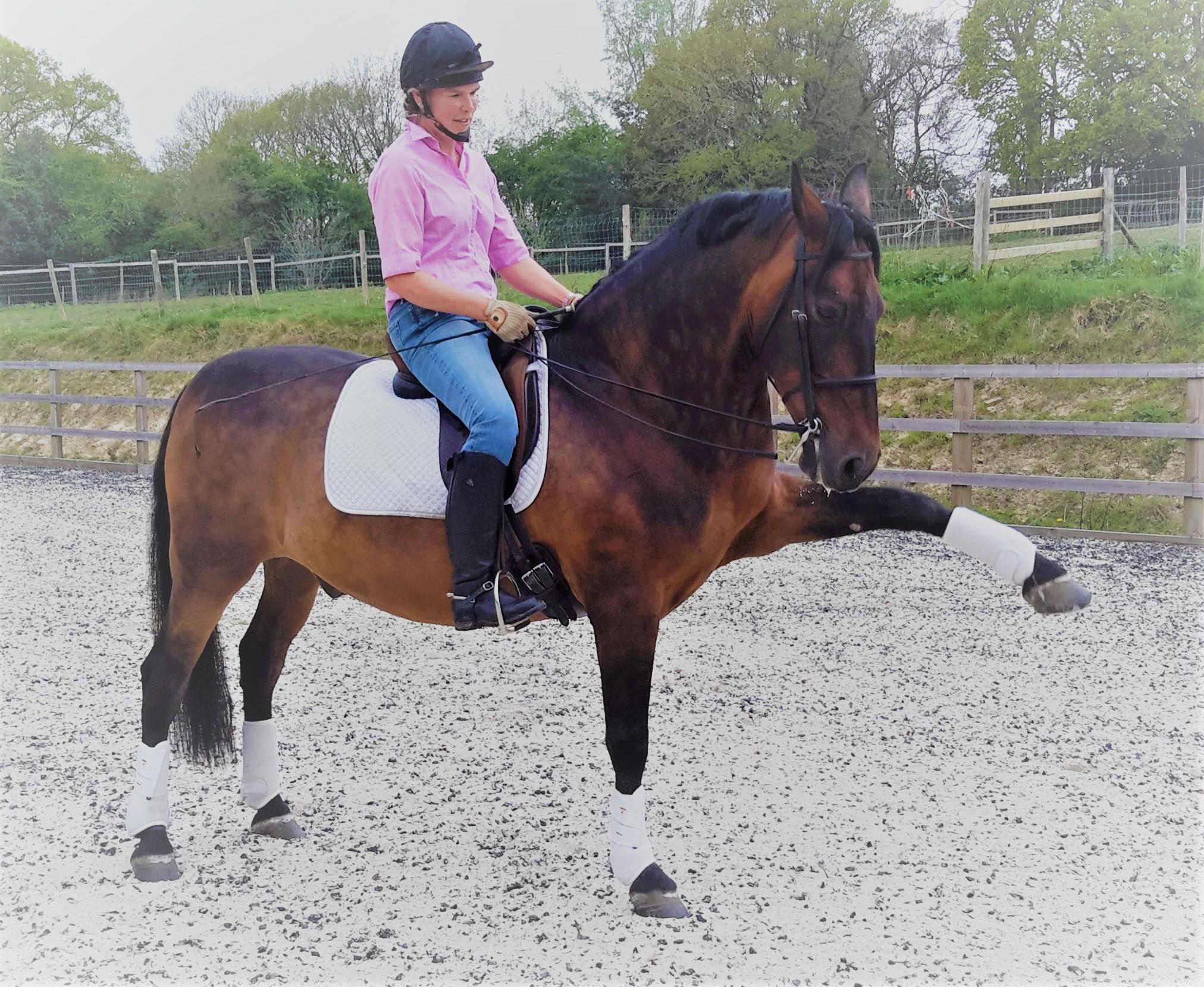 Thankfully no one else here suffers with Sweet Itch … just as well as we seem to have (in a stroke of pure genius) managed to have purchased a property in the bayou; at dawn, dusk and throughout the evening we are beset by unprecedented numbers of flying beasties, all intent on sinking their little fangs into anyone and everyone, so I’ve taken to sticking the Sweet Relief Lotion on me too … and it works and if you’ve been bitten, it takes the itch and the swelling out of the bite almost immediately. Intel worth knowing.

Obviously, I should add, that if you’re thinking of applying equestrian insect repellent to your own skin then (1) I possess no medical qualifications whatsoever; and (2) it might be an idea to patch test yourself initially … mind you, most ‘horsey people’ I know think nothing of eating their sandwiches with hands freshly dipped in hoof oil (or way worse), will consider a near amputation of one of their own limbs a mere flesh wound and are only truly happy when being launched skywards by some truculent beast that’s been ironically named “Poppet”; purchased from a ‘reputable’ dealer who can now only be contacted in writing c/o HMP Belmarsh, for a significant sum of money, as a novice ride that loves attention. Since acquiring “Poppet” it’s worth noting that they’ve been asked by the yard owner to fit their stable with a full frontal grill to stop “Poppet” from launching herself over it and dismembering passing members of staff and have spent every other Saturday in the A&E Department of their local hospital wrapped in 4 metres of blood soaked Vet Wrap accompanied by their fretful other half, who spends the five hour wait time holding severed digits and loosened teeth in a bag of frozen peas whilst imploring them to see sense and sell “Poppet” before “something really bad happens” … at this juncture it’s probably difficult to either qualify or quantify “something really bad” vis a vis “Poppet” as the only area in Poppet’s repertoire of skills set that remains, as yet, untapped by this four legged death trap is, in fact, immediate death through a combination of blunt force trauma and velocity of impact; so on balance, the prospect of permanently blinding themselves or acquiring third degree burns from a bit of insect repellent is considered a pretty low grade risk.

Anyway, that brings me neatly onto the fact that flies do seem to come with the territory of horse ownership/livestock in general and the lengths it seems that some of us will go to in our constant quest for an insect repellent that really works. Let me tell you people, like perfume, unless you constantly reapply, the efficacy of ANY insect repellent will wear off.

Let me also tell you that if TCP, Dettol, Lynx Deodorant (yes, really, seen that one on Facebook … followed shortly by another post from the same idiot asking if anyone recognised what the third degree immolation and hair loss her horse was now suffering from was?) mixed with the tears of a mermaid, the fart of an angel and two dead mice actually or ever worked as an insect repellent, then the pharmaceutical giants that make these products would be marketing them for that very purpose. Yet they do not. Or …. that if those pharmaceutical giants, with all the qualified cerebral might of the biochemists and medical professionals that they have at their disposal and on their payroll, can’t mix any of those ingredients together and come up with a viable and effective insect repellent, then it’s pretty unlikely that Sharon from Chatham’s nasal online Facebook tutorial showing you how to pour TCP and Dettol into the same jug is worth even her time, never mind yours (not to mention that by the time you’ve purchased all your ‘ingredients’, sourced yourself a mermaid, bottled a fart (not an easy thing to do I can confirm) and murdered an Avon Rep, it would have been quicker and cheaper to buy a bottle of something that was designed for horses and their skin pH (which is different to ours) in the first place.

Whilst I’m out here pondering these and other pressing matters that occupy my mind, such as ‘wonder what time will tea be? Have we got any dishwasher tablets’, I spot Huggy the Free Range Shetland reappearing on the horizon flanked by Seven and Luna, all gunning it back down the hill towards the yard, picking up speed on the descent. The Automatic’s tune “Monster” pops into my head as I put down my coffee and brace myself for the impending impact I know is coming … I should set up some speakers out here on top of the stables so that I can play that song every time this triumvirate hove into view (then maybe I could get the Spaniard clacking his castanets along to something other than his Julio Iglesias Greatest Hits CD as he gently passages away behind the stable door in time to Julio’s Latino tempo).

*These are the uninformed opinions of only the writer who has no knowledge, whatsoever, about, well, anything much … Julio Iglesias may not, in fact, be Latino at all, quite possibly hailing from Birmingham or some other equally exotic location and maybe he lives with Sharon, not her real name, who may very well not have hailed from Chatham either. History does not relate and I cannot remember.