HOMEPAGE > THE SPANIARD (A.K.A TORNADO) AND TECHNOLOGY

24 JUN THE SPANIARD (A.K.A TORNADO) AND TECHNOLOGY

My trainer is stuck in Australia (worse places to get stuck I guess), has been for several months now and is clearly getting bored … so she’s told me to send her some videos of me riding so that she can “virtually yell at me”. Now I love training and am genuinely missing her hopping up and down, apoplectic in the middle of the arena, screaming at me, so, as it seems we’ve all got a bit more time on our hands, I ordered some kind of tripod thing to hold my tablet device, affixed it to the arena fence with tablet clenched firmly in it, switched it on to video mode and whoosh, away we go ….

Well, away we try to go … with considerable difficulty I do my level best to drag the Spaniard away from watching Zorro on Sky Movies, a brief argument ensues with him about him wanting to change his name to Tornado and requesting that when I clamber aboard it would be way better if I could do it by leaping out of the first floor bedroom window … assuring me that he will wait directly beneath, standing stock still and that then we can stand on our hind legs before tearing off into the village to save a “beautiful senorita” from some dreadful fate involving gunpowder and a lot of gold.

It is at this point that I remind him that we live outside a tiny village in Kent, it’s pretty unlikely that we’re going to find any gold never mind a “beautiful senorita” (I ask earnestly: “do you not remember the trouble we had for the Christmas Nativity … it proved impossible to lay our hands on three wise men, never mind a virgin, so gold and Catherine Zeta Jones is pushing it I think”) and that if we’re tearing anywhere it’s going to be to the pub, not to try and inveigle poor Betty from No.2 Tinker’s Cottages to throw herself out of her bedroom window, sling her new hip skywards over your backside before setting off at a gallop into the sunset because not only is she 94yrs old but she has only just had a new knee to go with the new hip. Catherine Zeta Jones she is not and her relatives will probably have us arrested.

He’s not impressed with any of this and refuses to respond further until I call him Tornado.

Finally we get up to the arena and the boy was, in fact, on fire … we performed with the joie de vivre of someone who’d managed to grab the last 16 pack of Andrex bog roll in Asda, with the artistic expression of Picasso after 2 litres of vodka and some mind altering drugs and with the enthusiasm of a maniacally grinning Charlotte du Jardin on amphetamines being chased by Carl Hester in a fairy goblin outfit with a lunge whip and a Valkyrie hat with wings on it. To be fair Carl’s probably got one of those.

For a full 35 minutes we pulled out our most expressive medium canter, collected ourselves into a passage worthy of an 8 (in my head at any rate) of any dressage judge’s score sheet and were half passing away like a deranged crustacean until Laura Groom wandered past, stopped, squinted at the tablet/device and shouted “is this thing supposed to be on?” before lighting up a fag and jabbing a finger at it. 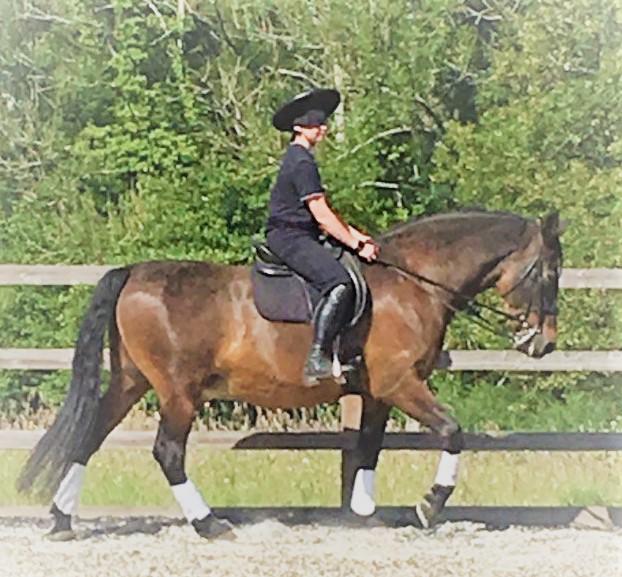 Brilliant. The video has recorded about five minutes that go like this: me clambering aboard the Spaniard like an arthritic octogenarian, or Betty from No.2 Tinker’s Cottages, me poking the schooling whip up my left nostril as I check my girth, me glaring at said schooling whip for its malicious treatment of my left nostril, us meandering aimlessly (trainer would go banzai if she’d seen it) up the long side with the dogs whilst adjusting pants, bra strap, reins etc before staring opened mouthed into space for about 1 minute 45 seconds straight while the Spaniard admires something off in the middle distance, Huggy the free range Shetland makes a brief appearance when he enters stage before suddenly dashing off towards the woods taking the dogs with him after which the thing switches itself off, it then starts up again (having been poked back into life by Laura Groom) capturing me as I dismount like an inelegant sack of spuds. Bugger.

‘Tornado’ says that’s it, he’s not doing any more today, he’s still got a full 45 minutes left of Zorro to watch and he’s just at the bit where Antonio Banderas is about to win Catherine Zeta Jones back and, as the Spanish Whirlwind has had his eye on his neighbour, Hanoverian the Barbarian, for a while now (so far his advances have met with nothing but, quite literally, a swift kick in the head) he’s hopeful that he may pick up a few tips to try and woo “the beautiful senorita”. I ask you! I am standing outside his stable trying to shut the door so that he can watch the rest of Zorro in peace, balancing saddle, brushes, bridle et al precariously on my arm when WIPE OUT! I am taken down by the triumvirate of Huggy and the two military spec dogs conducting yet another timed lap around the property.

Laying prone on the floor with the saddle upended on top of me, brushes everywhere and the schooling whip back up my left nostril I am contemplating my life choices when Dude’s head appears and a voice says “what are you doing laying there?” Stone me! The horse sounds just like Laura Groom … haha!

I scramble back into an upright position, dust myself down and enquire as to whether or not she might like to ride Dude out on a hack. The answer is yes and so I go and grab Tommy, my fabulous retired hunter, out of his stable thinking ‘this will be lovely, beautiful day, quiet hack around the lanes’ ...