HOMEPAGE > THE SPANIARD FEAT NEEM SUPREME V. WEAPONS-GRADE HORSEFLIES … AND THE GLOVES ARE OFF!

04 MAR THE SPANIARD FEAT NEEM SUPREME V. WEAPONS-GRADE HORSEFLIES … AND THE GLOVES ARE OFF!

I’m not a tour guide but I do know that Kent is notable for many things; Henry VIII installed his first wife (whose head actually remained on her shoulders) at Leeds Castle, before he shabbed off and left her for Anne Boleyn.  Sissinghurst Castle was home to Vita Sackville-West who had a pretty steamy time of things with Virginia Woolf.  Winston Churchill lived in Westerham and his slippers were recently auctioned, expected to reach a whopping £15k … someone else’s smelly slippers, yuck, and Pluckley in Kent is apparently the most haunted village in the UK, if you believe in ghosts … either way, Kent is also, in my opinion, notable for some immeasurably less salubrious resident organisms (and I’m not talking about reality TV contestants), I am referring to the Tabanidae; or to you and I, the horsefly.  I hope, in years to come, whenever Kent (referred to as the Garden of England) gets a mention, someone ensures that they mention the bloody horseflies too, or at least it gets rightfully twinned with the Everglades.

I squashed a mosquito here back in February.  Snow outside several inches deep, not a working tap in sight, everything frozen solid and there’s a mosquito indoors, on the wall.  Well, there was, until I squashed it (in our utility room if anyone’s interested), and then shouted triumphantly, “Ha! That’s the end of you mate!” to no-one in particular, other than the now dead and flat mosquito, who was no longer listening.

Some ten minutes’ later and I’m still trying to remove the smudgy mess of mashed-up mosquito from the wall (own goal right there), when it occurred to me as I scoured the cupboards for some cleaning fluid to try and sort the pulverised body of the deceased out, that (a) it’s a good job I’m not a Buddhist, and (b) insect season will soon be upon us.

So, after a few more minutes of ineffectual scrubbing, I concluded that no-one was likely to notice the mark on the wall, and a much better use of my time would be to dash outside to inspect my stash of Sweet Relief and Neem Supreme, in order that I might be ready for the inevitable insect onslaught (when, like an irate army, they will arrive tenfold).

Dusting off containers semi-full of industrial quantities of repellent reminded me of just how awful our first two summers here were, made miserable by the dreaded horsefly or, in latin, the Tabanidae (which sounds a bit like the Taliban, and I reckon is therefore a pretty accurate name for these flying menaces).

Now when I say that they made our summers miserable, I jest not.  In all the years of owning horses, never before had I encountered them in such number (or, on occasion, size … these things must surely require clearance for take-off from Gatwick Airport).  I’m pretty certain that some of my friends thought I was making it up, but my body bore witness to my woes.  I looked like something out of a Victorian Book of Diseases where I’d been bitten; swollen limbs worthy of a mention in the Elephantiasis Section, seeping wounds for the Oedema Section and the resultant itching and throbbing limbs … they can both go in the Pox Section I suppose, and I’ll move swiftly on from that one now, before this becomes a Penny Dreadful.  Either way, I’d have happily taken a sheet of sandpaper to myself (only I didn’t have any to hand), and was genuinely considering moving the horses elsewhere for the summer.

I know that all sounds very dramatic, but we couldn’t even turn out; let alone ride or lunge until after dark.

And then one day, before summer started in earnest (and I’d already had several close encounters with the first reconnaissance mission of horseflies), I was bemoaning this state of affairs to the Biteback team when someone at the other end of the line rolled their eyes (I could hear it in her voice), and said, “Sam, do you actually read any of the labels on our stuff?  The Neem Supreme is for that very job, deterring horseflies.”  Blow me!  I ordered some immediately.

It arrived promptly and was immediately put through its paces.  I confess to being slightly sceptical at that point, I held out little hope that anything was going to work against our annual summer plague.  Anyway, after Day #1 I went back and ordered five litres.  It works!

‘How have the Chemistry Elves at Biteback done this? What sorcery have they invoked?’  We marvelled as we rode throughout the summer, and during daylight hours too. 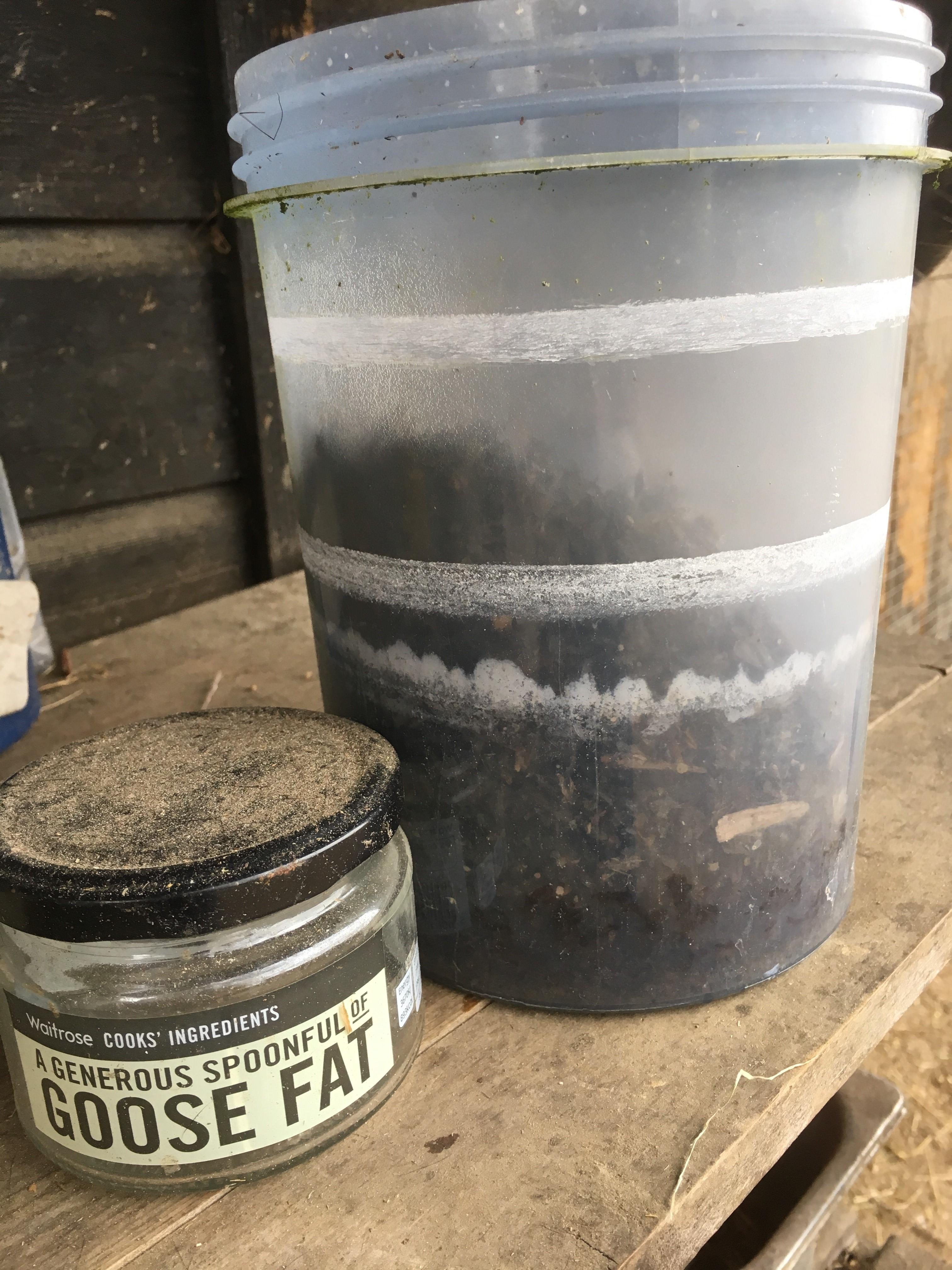 Sam is well known for her trapping and killing ability!

Most of the horses went out without fly rugs and grazed happily until it wore off a few hours later, they came in calmly and without looking like they had a severe case of Urticaria.

In short, Neem Supreme holds horseflies at bay long enough for you to do a seriously sweaty session in the arena, a reasonably long hack out and provides protection for your equine mates for a reasonable period of turn out too.  The horseflies will land but they don’t bite, apparently they dislike the taste (who even knew they had taste buds?)  I got bitten just once last summer (I was taking little or no chances and was dousing myself in it too), but one ambushed me in ‘No-Man’s Land,’ between the house and the yard, so now I keep a bottle indoors to apply before I head out. Still, that’s nothing short of miraculous when compared to the myriad of bites I’d received every year previously.

Neem Supreme absolutely works against weapons-grade horseflies, so stock up on it … because if living fossil and National Treasure, Sir David Attenborough is right, and I’ve no reason to think that he isn’t, we are in for hotter summers, ergo more biting insects.

As an aside, if you are unlucky enough to get bitten by a horsefly, you can try popping some of the Sweet Relief lotion on the bite, I found it works like an absolute charm, swiftly taking the itch and heat out of it (note, however, that this is not medical advice I am dishing out here as I am not a doctor, and the Sweet Relief lotion is, in fact, designed for use on horses not humans, and on horses I can testify that it too works brilliantly, keeping our sweet itch sufferer here midge free and relieving any itching, making him more comfortable and much less inclined to rub when stabled … it also makes his coat shine like glass, so it frequently gets used on the others too now when grooming for that reason alone).

Ready yourselves for the summer ahead people!

Adios Amigos until next time