HOMEPAGE > THE SPANIARD FEAT SEVEN AND THE HORSEBALL

05 NOV THE SPANIARD FEAT SEVEN AND THE HORSEBALL

It’s not just all about the horses … we’ve got 7 dogs too. I know, it sounds like a lot when you say it out loud but you don’t really notice just how many there are, not when they’re all whizzing about the yard like Gremlins on amphetamines … until you get a vet’s bill that is. Then you notice.

Routine trips to the vet are chaos: one always escapes and runs riot about the place, another one will wee up something (or someone), two or more will start fighting and then one, or both, of the military types, will growl at the poor vet (who’s now in the middle of a nervous breakdown) and I will be presented with one of the three following options: either the needle, to administer the vaccination myself, a muzzle, or be asked to leave.

As with all animals, there are also non-routine visits to the vets. In my experience, these are always and without fail, ‘out of hours’ affairs (so add £160 to your bill right there and forget getting your car fixed). These visits will also require you to purchase vast arrays of drugs with a street value worthy of a mention on News at Ten; roughly equivalent in price to that of a three bed semi-detached in the Home Counties, and are just some of the reasons why I drive a crappy van and can’t afford to get my hair cut.

Just such an event occurred some weeks’ ago, when (at roughly 6pm) one of the military types, Seven, appeared indoors wearing a large pink horse treat ball on his head. The kind you’d struggle to poke a fifty pence piece through the aperture of … but, it transpires, not the kind that you can’t get a 32 kilo dog’s head stuck in, if the dog in question is determined enough. 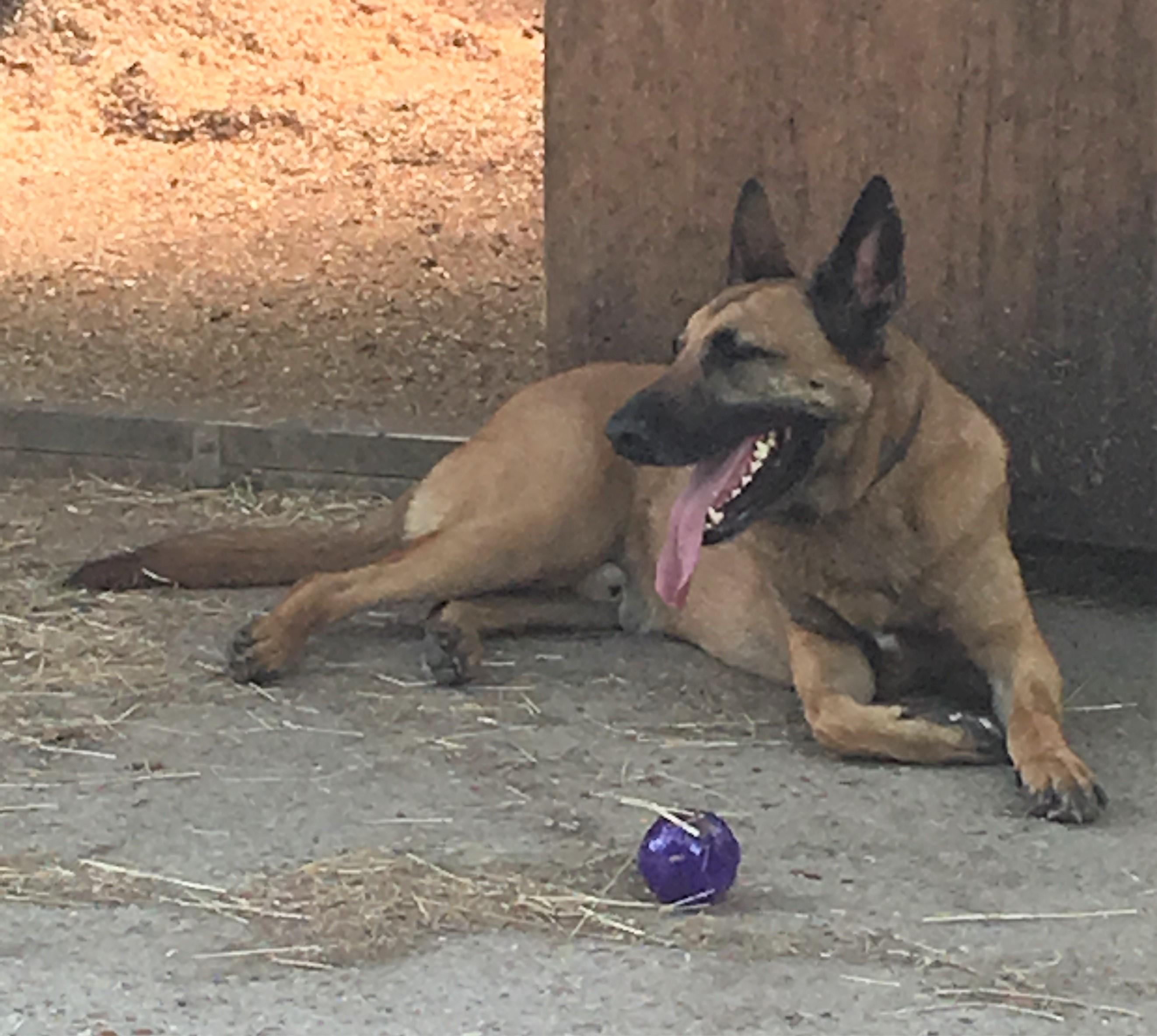 Seven the stable dog, casually protecting his territory (and a somewhat smaller ball)

How on earth he managed to get this thing wedged onto his head (well his muzzle to be precise) remains one of life’s mysteries, so out came the butter (my go-to weapon of choice in such situations *nb: no human should actually eat the butter here, it often gets wheeled out for stuck willies, rusted nuts on the arena leveller and rat bait) and between me and the other half we tried valiantly for about an hour to remove this thing, but our efforts were in vain, it was wedged solid.

So around 7.30pm on this Friday night I am forced to admit defeat and phone a local vet, our usual vet being some distance away. The conversation goes thus:

Me: Yes, hello, I’ve got a dog with a horse ball stuck on his head, can I bring him in?

Me: A horse ball. Stuck on his head.

Vet: I’ve never seen that before.

Me: Well in about ten minutes’ time you will.

Vet: Laughs nervously (not sure if this is a prank call)

We arrive at the vets and are greeted, I get the miscreant with the big, pink, plastic horse ball stuck on his head out and our conversation continues from earlier:

Vet: Does he have any words we should avoid using in surgery?

Me: Yes but he’s not going to bite you, you see, he’s got this horse ball stuck on his head

Vet: Oh yes, ha ha (laughs nervously again), okay, but you’ll have to come into the surgery while we sedate him.

The ‘surgery’ is about the size of an aeroplane’s toilet, and I’m squashed in there with the vet, three nurses, and 32 kilos of increasingly p*ssed off dog. I can only deduce that their desire not to be bitten has far outweighed any social distancing concerns they may once have had.

Seven gets the injection. He takes it pretty well. He nods off and I leave to wait outside, where I text Laura Groom to complain that instead of getting a dirty kebab takeaway tonight I’ll be getting a bloody great vet’s bill instead. Laura Groom immediately responds with lots of laughing faces and asking if I can take a picture of the whole mess. Sympathy never was her thing.

I’m just about to reply, when the vet reappears. She’s making weird faces (like the ones that the other half does if another horse appears on the yard or he finds a Shetland in the house). She’s gesticulating wildly with her arms at me, breathlessly she imparts “Can you come back in now please?” She’s already turned and is running back towards the surgery, I’m running behind her, she continues, “He’s woken up, he’s not happy.”

My thoughts on this, given that he still had the ball wedged on his head, were that they should just jump on him and stick him full of more drugs. Apparently that’s not how the Royal College of Veterinary Surgeons like to do things.

She’s bang on the money. He’s in there behaving like a Milwall fan after 10 cans of Stella. He’s falling about all over the place, growling his threats and has everyone cornered. So I jump on him, and then they fill him with enough anaesthetic to knock out a small elephant. He’s out for the count. I go back outside.

Twenty minutes pass and I’m thinking there’s still a chance I might get to the Kebab shop before it shuts when the vet reappears.

“We can’t get it off,” she laments, “Our power tools aren’t strong enough to cut through the plastic. You might have to take him elsewhere.”

She stares at me, open mouthed, and I stare back, not knowing quite what she wants me to say and then, without another word, she disappears back inside. With hindsight, I think the thought that I might seriously attempt to remove the ball from the dog’s head with an angle grinder purchased from a builders’ merchants, spurred her on to Herculean efforts on the dog’s behalf.

I don’t see her for another two hours, after which time she appears, triumphantly waving the horse ball above her head and shouting at me to get back inside because he’s come round, eaten one muzzle, they can’t get another one on him, and his mood has not improved.

To be fair, after his initial euphoria of getting the thing stuck on his head wore off, he’d been pretty unhappy about the whole thing ever since.

In I go and there he is, at it again! I’m passed another muzzle, which after a brief and undignified struggle on the floor of the surgery I manage to attach to him and then I am tasked with removing him.

“Isn’t he supposed to stay in for a couple of hours, for you to keep an eye on him until the anaesthetic wears off?” I ask, already guessing the answer.

“No, that’s fine, he can go,” says the vet, waving the card machine at me.

£400 lighter I stagger out of the surgery with an armful of angry dog. He has a go at someone waiting outside to go in and I nearly drop him on the floor, 32 kilos is a lot to carry, especially when 31.9 kilos of it is spoiling for a fight.

I have been told that he won’t be able to do stairs or walk very well, and that the bandages must remain in place for an hour at least.

I plonk him in the passenger seat and he stretches out the entire width of the van. I drive home with his head between my knees and one large, front paw delicately shoved up my nose, while the other front paw remains jammed hard up against the windscreen wipers’ lever, causing them to remain on at maximum setting for the duration of the journey home. It’s not raining. All I need now is to get stopped by Kent Constabulary’s finest.

We make it back and I carry him indoors, staggering under his weight, to where his bed has been laid out, a veritable sea of comfy blankets. I place him gently down, doing my best not to keel over on top of him in the process (I’m pretty sure I’ve put my back out and something in my right knee has just made a sinister popping sound).

I stand back and regard him lying there, gazing up at me, in much the same way that I imagine an over-indulgent parent might gaze upon a spoilt child … and with that, as if to confirm that he is indeed a spoilt ‘child’, the bugger jumps up, rips the bandages off, shreds them and legs it off outside to the yard.

I’ve missed my takeaway, not that I can afford one now anyway. I rummage around in a cupboard and find the brandy, pour myself a large glass and text Laura Groom, wondering if she’s still awake. 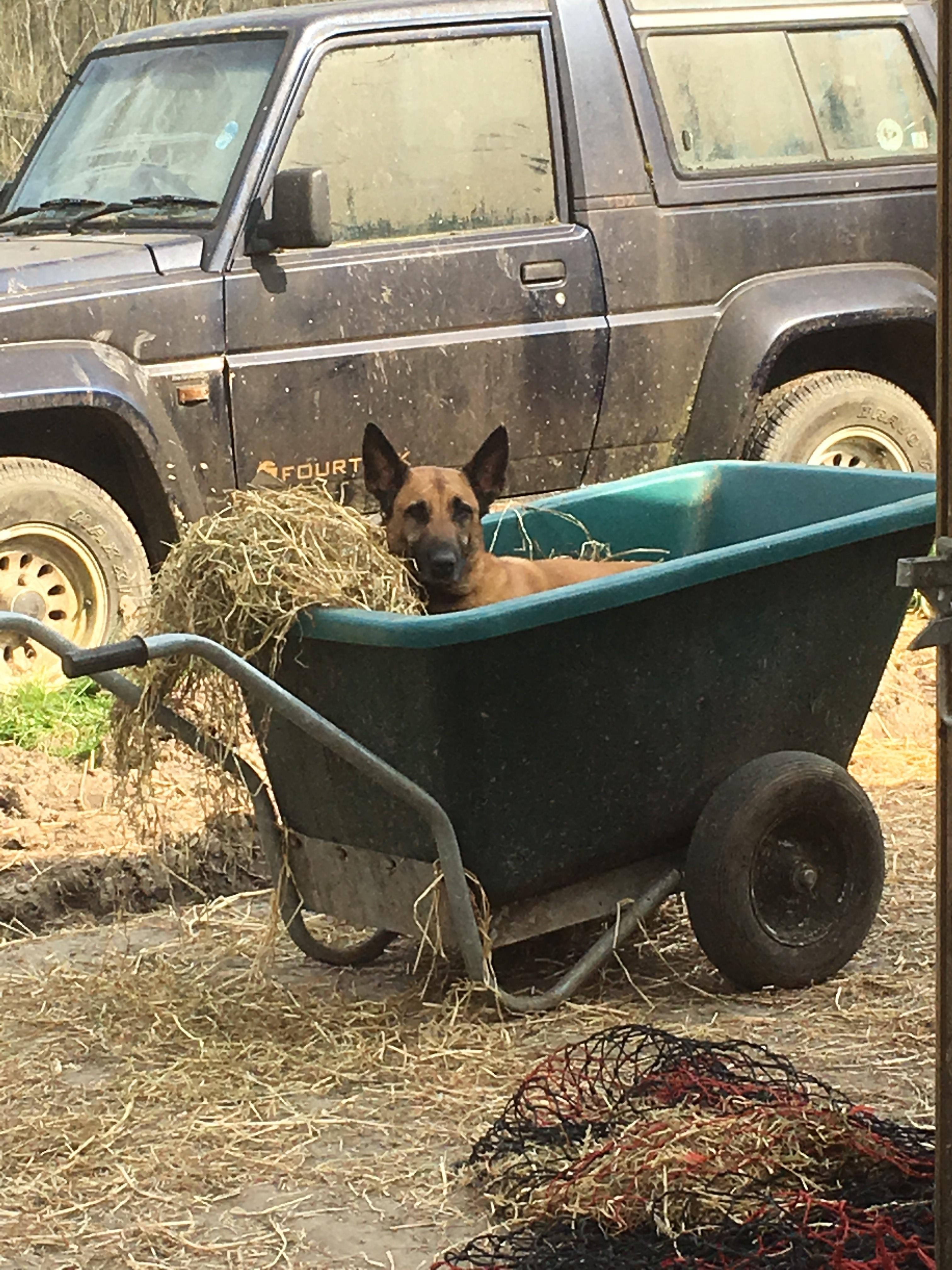