HOMEPAGE > THE SPANIARD (PT 4) FEATURING TOMMY A.K.A. SHADOWFAX ON E-NUMBERS

04 AUG THE SPANIARD (PT 4) FEATURING TOMMY A.K.A. SHADOWFAX ON E-NUMBERS

It’s been a long time since anyone has really done much with Tommy, a 17hh grey ID hunter … for his part, he’s just been doing his thing out in his field for the last couple of years; waste of a good horse really … that was until earlier this year, when Tommy decided that whilst his field was okay, full of things in life that he liked (grass, trees to scratch his bum on) maybe life had become a bit quiet after all and, without further ado, he started removing himself from said field; jumping out of it on a daily basis or hourly, in fact, if you tried putting him back in it.

Eventually I gave up trying to turn him out in any of the fields here and we (well, he) settled on an area of the garden which he finds agreeable, next to the chickens and by the pond. Close enough to the arena for him to be able to terrorise anyone riding in it by galloping at it full tilt, several ornamental trees to smash the lower branches off when using as a back scratcher and the chicken run to use for circuit training (small wonder they’ve stopped laying eggs). Plus, Huggy the free range Shetland can visit him any time he likes by charging across the garden at Mach 8 with the two military spec dogs in tow. What’s not to like?

So, what do you do with 17hh of thumping great Irish Draught that has decided to bring himself out of retirement unannounced? You stick a saddle on him and take him out for a ride with Laura Groom and Surfer Dude, that’s what you do … what you don’t do, I should add as a cautionary note, is you don’t fill him full of barley because you think he could do with a bit more weight on him. You don’t stuff him full of haylage nets that weigh more than you do … and you don’t let him eat his own body weight in/of sweet grass from your lawn. Not only because all of these things are quite likely to make the 17hh brute a bit excitable but because the last one can make your other half a bit excitable as well; causing him to make weird angry faces at you whilst gesticulating wildly and shouting something unintelligible about the lawn and, lastly, you definitely should not look at a bridle and think ‘yeah, we’ll be alright in a snaffle’ because you can’t be a*rsed to change the bit to the razor wire one that is historically required to pull this boy up from full throttle.

So everything starts well enough … I get on (using a garden table as a mounting block, cue more weird angry faces from the other half) we set off down the drive, “adios Spanish” I shout cheerily as we depart the yard, through the gate, down the bridle path and off towards the lane … and that was where the good bit ended because it was at this point, of near vertical descent, we started to pick up speed. 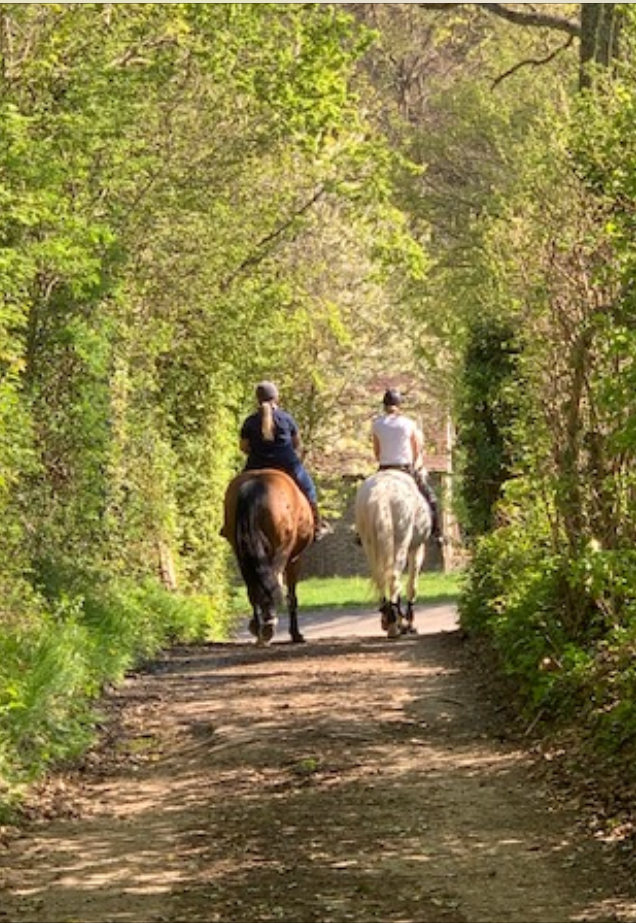 The Calm Before The Storm

We took the first corner on two wheels (metaphorically). About 300 yards into our ‘hack’ and my arms are already locked in position, I daren’t try and adjust my stirrups and the girth? Forget it. I’m just going to have to hope for the best.

For his part, Tommy is now almost entirely covered with foaming white sweat already, it is flying off him in every direction, covering Laura Groom and Dude. We haven’t broken from a canter half pass at speed and we’ve not even got past the neighbour’s house yet.

After at least an hour (felt like five) and in a vain and desperate attempt to bring this torture to an early end (albeit Tommy was absolutely living his best life by now, fully realising just how ineffectual the snaffle bit was) we swung up a bridle path, praying at this point that it would bring us back full circle more swiftly than going back via the lanes … it was not to be; having gone most of the way along it, we discovered (to my utter dismay, honestly felt like crying) that Covid-19 had locked the ornamental gates at the end and we now have to double back on ourselves … Tommy was incandescent with excitement. Hopping up and down on the spot, waving his front feet about in an equine Mexican wave. Like something from the F1 start grid running on nitrous oxide we burst away as we turned around, Tommy looking every bit like Shadowfax on E numbers.

About 2 miles from home, sanctuary, gin and painkillers we encounter the young and ethereally beautiful Theo, a neighbour’s son, in his tractor … he looks a bit like Legolas from Lord of the Rings but with wellies on. By now I’m gesticulating wildly at him to get him to shut the engine off as Tommy has developed a chronic case of Tractor Allergy and I’ve lost all feeling in my hands. Theo obligingly cuts the engine and smiles as we whistle past sideways, a flying, foaming, sweaty mess. I shout my thanks and Laura Groom shouts “you’ve lost your tissue!” Laura Groom and Dude are still with us, keeping a discreet distance behind in the downdraft of our foaming sweat (poor woman, it gets worse).

I ponder this new intel for a second before shouting back “I haven’t got a tissue” and turning I catch sight of shredded bits of what can only be my panty liner as they fly out like confetti behind us … my jeans have split under duress … in their defence they are about 15yrs old and right now I’m probably very close to making fire such is the friction quotient in that saddle - my backside feels like I’ve spent 2 weeks in Aya Napa on Rohypnol.

Exactly two hours and eleven torturous minutes later I drop like a stone to the floor on the yard, crooked and bent, broken in fact. The jeans look like Kanye West has had a go at them for his SS20 show and I’m unable to sit or stand fully upright.

Tommy, on the other hand, looks delighted (if not a little sweaty) with his outing. Laura Groom kindly washes the g*t off and I put him back out … back in the garden where I found him and where, frankly, if I’d had any sense, I should have left him well enough alone.